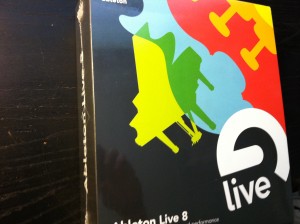 I’m now officially an Ableton Live user. It’s been long over due.
I got into the software back at version 4 in 2005 with a trial version, but for whatever reason my brain couldn’t get around the application at first.

At the time Reason became my software of choice along with Pro Tools for all things audio and midi related.

But I’ve known for a while that Ableton Live would greatly impact the way I create and perform music. And now I’ve finally got it rolling. This last Sunday was my first time using it in a worship service.

If you don’t know anything about Ableton Live, you could basically describe it as a midi and audio sequencer that works like an instrument for live contexts.

It is a fully capable DAW that can support multi-track recording, midi sequencing, VST instruments and third-party plugins, but it’s more than just a virtual studio. It’s also a very flexible tool for recording and manipulating loops in real-time, on stage, in the middle of a gig.

It’s a staple in the electronic music world and the application of choice among virtual DJs.

Though I plan on using it in the studio, the primary reason I got it was for playing back loops and click tracks for our church during our worship sets on Sundays.

So here’s what I did on Sunday 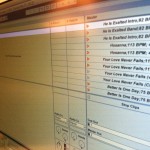 I’m in process with this software and still have much to learn, so if you’re an Ableton user and have any suggestions please don’t hesitate to leave your comments.

In Live’s master channel strip I set up the song list with tempos and time signatures. (See pic on right)

I split up the stereo sends, assigning the click to the left and the loops to the right. This allows for the click to just be in our monitors while the loops are in the main mix.

I would rather have a stereo out for the loops, but I would need to figure out a way to still run the click in the background.

The clicks are launched before we start the song by creating an empty midi clip between scenes so that nothing else plays. You can see that in my next picture. 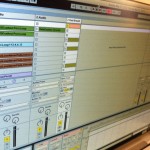 But here was the challenging part.

I lead from the guitar. So naturally my hands are tied up most of the time. It’s ideal if you have someone else in the band launching the loops, but they need to know the software well enough to correct mistakes on the fly.

It really depends on your particular band situation when deciding who will be in charge of the click/loops. Here’s a great post over at loopsinworship.com that goes into more detail on that subject.

My plan is at some point get a midi foot controller for maximum control. But in the meantime I’m using my trusty old M-Audio KeyRig 49 to fire the loops. 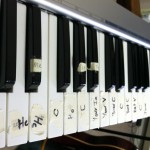 I had it on a stand to my right and simply mapped the keyboard to control launching each click and loop for the songs.

As you can see my masking tape method is pretty makeshift!

It simply went from left to write starting with the click for each song and then followed by their loops. Just a simple touch of the key to launch each scene.

Finally, I used my Apogee Duet with two DI boxes to get sound from my computer to the sound system.

Ableton users: speak up in the comments!