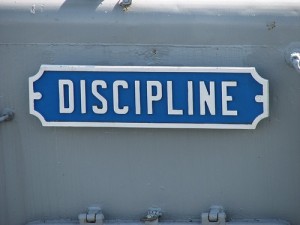 I’m developing a new blog series on the pleasure of productivity.
It’s the idea that when you learn the art of simplicity through discipline and organization you have a more focused motivation and energy, resulting in getting more done.

It’s based on an acronym my Dad would use when I was a kid: D.O.S.E.

In this post I’ll focus on the D in our little acronym.

Self-discipline is something we would all like to have more of, but where do we begin? What exactly is self-control and where does it come from?

In it’s origins discipline is systematic and deliberate development taken up by a disciple or an apprentice. You are learning from someone else who is better at it (whatever it may be) than you are. Rigidly defined, discipline is training that is aimed at producing behavioral change.

Eventually, due to a consistent set of rules, rewards, and ramifications, discipline says you will be a “better you”. It is instruction and teaching, coupled with training and practice.

I believe that discipline – in the general, self-control sense of the word – looks to someone or something for inspiration, and accountability. Discipline hopes.

Everyone does what they want. We are all hedonists walking through life doing things that we think will make us happy. Discipline simply denies what Seth Godin calls “the lizard brain” and merely lives a life of believing in a yet-to-be-seen reward.

The person who forgoes the pleasure of snoozing another 30 minutes to work out or pray, gains another pleasure later. When you deny yourself 30 chicken wings you feel better for it. And usually the pay-off is a no-brainer. (I’ve actually eaten that many in one sitting unfortunately)

Another example: I’d much rather have $1,000,000 at the age of 65 from saving $100 a month between the ages of 20-25 using the power of compound interest, than spend that $100 a month on new clothes that I’ll eventually grow out of. I most likely won’t be wearing the same trousers when I’m 65…. unless I keep denying myself those Buffalo wings!

But it’s much more than just being able to do hard things. Discipline is tied to purpose. Discipline starts with vision. It begins by having someone or something that you look to in order to keep you going.

Doing discipline for discipline’s sake is not going to last. You’ll just get jaded and give up. Because let’s face it; discipline is often painful and no fun. There will be days when you simply won’t want to get out of bed.

I’d like to propose that by following this little acronym you will be more motivated than ever. You’ll begin to realize that D.O.S.E. is cyclical. Once you get that first taste of productivity pleasure you’ll get better and better at it. Discipline, organization, simplification, and energization gets addictive.

But D.O.S.E. is only a utility. You have to plug your own vision and purpose into it or else it won’t work for you. So what’s your vision? What’s your purpose? Why do you exist? What gets you out of bed in the morning?

In my next post I’ll say a little something about how I practice this in my own life. I’ll talk about purpose and how it fuels discipline. I’ll also do a brief exposition of my life purpose statement and how I apply it each day.