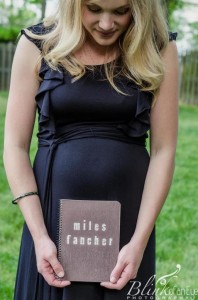 It’s been a whirlwind lately. I’m heading down to the beach today with Katie for a much-needed vacation. I may get a lot of blogging done or may not do anything at all. We shall see.
WordPress is great though. I can schedule a post ahead of time. Like now. I’m actually writing this on Wednesday the 2nd. So for you that’s last week. Love it.

My blogging mostly happens during the early morning. I find it very therapeutic to just write. I later refine the posts and schedule them ahead of time to publish.

Sometimes I have nothing to write about. Other times I have a clear topic or a series I’m in.

Today it’s all about the last 4 months. Here are just a few highlights of the Fancher family’s start to the year.

As many of you know, Katie and I are expecting! June 12th is the due date for the little guy we’re going to call Miles. Miles means soldier and one who shows mercy. We really love the contrast between the two. Tough yet tender. Tenacious yet tactful. We chose his name around the turn of the year. Once we found out that it was a boy the name came pretty quickly.

We also found out Miles has a limb difference. He is missing a finger on his left hand and his left forearm is shorter than his right. At first we weren’t sure what it all meant, but it’s been a pretty incredible journey as we’ve meditated on the glory of God in His purposes for Miles. We have an amazing ride ahead of us. We can’t wait until he’s born. He’s measuring a little above average. He’s going to be a big guy!

In January I went to Grace Church, Chapel Hill for what turned out to be an awesome night of worship with the band there. My good friend David Dollar took the worship pastor position after I left two years ago. Pretty crazy how it’s already been two years. So many good things are happening at Grace. Miss you guys!

David and I wrote a song together last fall that I’m planning on recording soon. I’ll let y’all know about that soon.

Later that same month I did a little interview at a Christian radio station in Winston-Salem. It was on a program called “Local Flavors”. That was fun. Here’s the interview. We talked about my latest EP Surrender. Good times…

In February the team at LWC went to Raleigh for the regional Acts 29 leaders gathering. Even though we’re not an A29 church, we draw a lot from that network. J.D. Greere, Tyler Jones, and Eliot Grudem were the main speakers. The topics, worship, and hang with the bros was definitely a good time. A great church hosted it. Love those guys.

In March we celebrated the wedding of Josh Solheim and Katie’s sister Lizzie. What a fantastic couple. It was a gorgeous wedding at Figure 8 Island. The ceremony was outside, and the reception was held at the Yacht Club there. It was a great party… I DJ’d.

So happy for Josh and Lizzie!

In April I created a Soundcloud account. In a recent post I wrote about my songwriting podcast that I’m hoping to do using their social technology. I have a handful of new songs sitting in the marinade part of the creative process. I had a day in December last year where I got about 13 song ideas down in about a 5 hour time frame. Not all of them are even close to being finished though.

My plan is to begin posting short audio demos of a few of the songs and ask for feedback from those of you who follow me on Soundcloud (using their commenting tools).

So that’s just a few of the big things from January to April… Stay posted!