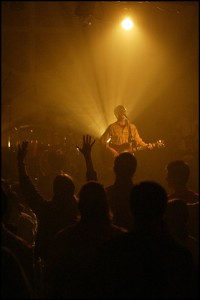 As most of you know Mali came to an end last summer in June. We felt it was time for a new chapter for each of us. We each had different paths to walk…
Being together for about four years or so, Mali was such a great season in each of our lives All four of us would definitely say that God put us together. It’s a fascinating story for those of you who haven’t heard it. Go get a cup of coffee if you need it…

After I graduated High School in 1999, I moved to Nashville, TN with hopes of becoming something musical and inspiring. It ended up being a rough period of my life as I realized how naïve I was. I loved the town and the people, but I wasn’t prepared to take on the toughness of the “Music City” way of life. So many beat up people in the music business having been chewed up and spit out let me see the dangers of putting your hope in the wrong thing. Thank God I wasn’t actually tenacious enough to get as far as they did. What a drag to work so hard only to be drained of all life in the end.

When living in Nashville I never dreamed I’d move down to Alabama. The only time I had ever visited the place was when I was about 10 years old seeing some old Battleship in Mobile. It was truly a life changing experience… (Please note my tone!)

I’ve grown up since then and the USS Alabama has my respect. And actually I really enjoyed living in Alabama. Especially in the fall. The Natchez Trace Parkway was a regular retreat drive when I needed to clear my head.

I moved down after meeting some guys through mutual Nashville relationships. The way we met was, well… funny.

Michael Curtis, a writer for Billy Bob Publishing in Nashville, was planning the creation of a different kind of “Boy Band”. These guys would actually play their own instruments… Which was a good thing because the guys he was trying out couldn’t dance anyway.

Among the mix of prospects was myself, Jamie McFarlane, and Justin Holder, who had both grown up in the Muscle Shoals, Alabama area. When the three of us met, there was instantaneous musical chemistry. To make a long story short… God spared our dignity and we ditched the boy band. We decided to simply be our selves; as original as we possibly could be.

So I packed up my little green Mazda pickup with all my goodies, gear, and what few groceries I had left in the pantry. Two hours away was the ever illustrious Northwest Alabama; steeped in the recording legacy of Aretha Franklin, The Rolling Stones, and of course the famous Muscle Shoals Rhythm section.

We ended up adding another Nashville cat, Matthew Kennedy who moved down a month after I did. Matthew being originally from South Africa was culturally savvy, had a voice like Robbie Williams, and looked like him too. Matt and I both began writing new songs together and even today we still have a special co-writing relationship.

But there was still a missing puzzle piece. We needed that extra component to complete the sonic spectrum. Justin DeJong, being greatly influenced by the likes of The Edge and Mark Knofler, was the finishing touch to the group. Justin was a Vermont native who had moved to Alabama with a big crew of other Vermonters, to be a part of a Bible College called “Heart of David”. There he met Nellie McFarlane, Jamie’s twin sister and they ended up falling for each other right there in the studio while recording a “Heart of David” worship CD. And so goes the wonderful phenomenon of people meeting people and playing music together…

Named after our lead singer, our band Kennedy had one goal. TO PLAY GOOD MUSIC. We just wanted to become a successful rock band. One who didn’t worry so much about the message in the music, but just enjoyed playing the music. We mostly played night clubs and bars around the Triad area. After doing a few shows in Nashville, we brought on a manager and did the “Showcase” thing for a few different industry executives. It was a really fun time of life, but all that changed when the calendar fell on Sept 11, 2001. God really shook us up; As He did many around the world.

We began asking ourselves what our ultimate purpose was. We felt there needed to be more of an eternal perspective in our music. Each of us being believers knew deep down that God had given us these gifts to be employed by Him and for Him. Up to that point we hadn’t been acknowledging Him very well.

Matthew decided he should go solo and move to L.A. along with our manager Clayton. The rest of us remained together and decided to change the direction we were going.

Growing up I was so impacted by Worship Leaders like Kevin Prosch, Martin Smith, Rich Mullins, Noel Richards, etc… But my father, Kent Fancher probably had the most influence on me when it came to seeing how it was done on the bad days as well as the good ones. We even had a band called Malachi and the two of us wrote all the songs. It was my first band and Dad was my biggest influence.

It was the same for the other guys. It‘s no mistake that they were also raised under Worship Leaders. That’s actually how we got our name… Just like my first band taken from the book of Malachi where it talks about fathers and sons. When driving back from Nashville one evening we went through hundreds of heinous names for bands. Everything was awful until Jamie and his witty mind finally came up with Mali (as being short for Malachi). Mali was also the name of his best friend’s dog, and the name of the country in Africa. But we deferred to the bible verse whenever people asked, “Why Mali?”
Because we all know that naming a band after a dog is a bad idea and “Jesus, Precious” was far from tribal music.

In Alabama, there wasn’t much for a Christian rock band in the way of good Churches that would send us out as a ministry and fully support the calling of God on our lives. Even today there are still churches in the South who would think that electric guitars are of the devil.
So In January of ’02 we packed up my little truck once again and headed to the East Coast.

From the start there was a great feeling in Chapel Hill. We had come from the Triad in Alabama, to the Triangle in central North Carolina. Tobacco Road, as it is known, might as well have a university on every corner. Talk about a college town! University of North Carolina, Duke, NC State, Wake Forrest, to name a few. Man I thought the Razorbacks had crazy fans until I went to a Duke game and experienced the Cameron Crazies… woah.
BUT As you can tell from the pic above, I am a Tarheel. Just let it be known now…

Mali experienced such a great season of playing some of the coolest events I’ve ever been a part of. I’ll never forget when we played “The Call” in Dallas, Texas. Seeing 25,000 people fully engaged with God during Awakening Days jumping up and down to the hook, “The Lord’s gonna raise the dead!” was quite amazing. The great thing is that it was undeniably about God and not about Mali because no one even knew who we were! Getting that gig was just the favor of God.

And of course, four awesome years doing “War Cry”, the annual GCI Conference for teens. “Something’s Changing” was written right there from the stage as God filled the room with His presence.

In our four years together we played with some of the most random combinations of artists…. From rapper Mase to inde rock band Roman Candle. From Christian rockers like Seventh Day Slumber, Decypher Down, Sanctus Real, and Day of Fire to worship leaders like Robin Mark, Charlie Hall, Misty Edwards, and David Crowder. We recorded our full length album “Awakening” on our own between five different locations, including our church and our houses… all on a shoe string budget. Oh the stories I could tell about our time recording that. Because of Holder’s chest pounding kick-drum pattern on “Awakening Days”, neighbors got mad… That’s all I’ll say.

I feel I’m almost doing a disservice to the Mali story by trying to tell it… because there’s no great way to put a life experience into words. Those were days that could never be repeated even if we tried. They are memories meant to ignite fire in us for God and for whatever he brings our way next. Playing great music with my friends was my favorite part. I hope to always do that… So in that sense Mali isn’t done at all. I look forward to all that God will do…