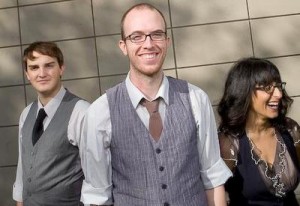 Say hello to my friends, from Boulder, The Autumn Film.
It’s been pretty exciting to watch them grow and develop over the last few years.

You can find their original songs on three full length releases. Safe and Sound, The Ship and The Sea, and 8 Track Tape will not let you down.

The Onion described them as “a post-collegiate Fiona Apple jamming with Snow Patrol…” And their single “Roll Over Me” arrested the attention of viewers around the country when it appeared on CW’s One Tree Hill.

They’ve been taking their delightfully soothing sound to living rooms across the US doing house shows, as well as playing in churches with their hymn project Page CXVI.

And now with a refreshing twist, they’ve just put out a short three song EP called The Autumn Film Covers Coldplay which you can get from iTunes here.

Watch the first of their three videos below. Here they cover the recent Coldplay single, “Paradise”.