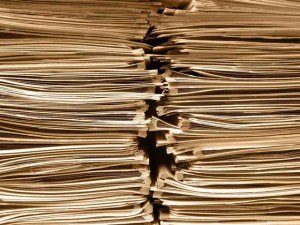 We’ve been talking about the songwriting process and the tools used along the way.

Creating consistent writing habits, using tools that work for you, will make you a more prolific songwriter.

And if you’ve got the raw talent, then you’ll not only be writing a lot of songs…

Every songwriter will tell you that they have unfinished ideas and songs just sitting around waiting to be fine tuned.

This is absolutely OK.

Every writer should have the goal to finish what you start, but the timing will be different for every song.

Some songs will improve over time with patient craftsmanship, revisiting the refinement stage, and other songs will come in a matter of minutes.

Moments of undeniable inspiration will come one day and give you that once in a lifetime, very special song, and many other ideas will need to just be started over or even deleted.

More Tools For Ya

Dropbox is a great tool for structuring and organizing folders in the “cloud”. It’s great because it not only keeps your files backed-up, but makes them shareable with others – a very useful feature for a project with multiple collaborators.

Other similar solutions are Broolz, Tonido, and Jungledisk. Google Docs – though for docs only – is another easy to use, shareable method of archiving as well.

Allow me to geek out for a sec…

My main method is simply built into the way OS X (Mac Operating System) is structured to organize files and folders. I create a folder for the year I’m in (under ‘Macintosh HD’), and then branch out from there. Bear with me as I explain.

Under my 2011 folder I have a folder for songwriting labeled /Songwriting.2011.

Once I have a song started from the capture stage using Evernote, I then put songs in the following categories:

These are songs that are still in process. I try to focus most of my attention in this folder with the goal of keeping it as empty as possible. The hope is that I’m consistent with finishing what I start.

Here are songs that are done and ready to be copyrighted. I usually have a lyric sheet, chord chart, and a recorded demo of some kind. For copyrighting your songs visit http://www.copyright.gov/

Here I have songs organized by titles. OS X automatically puts them in alphabetical order. Each song has it’s own folder with lyric sheet, chord chart, and demo. Typically when I’m planning to put out a new record I’ll draw from this folder.

Here’s a screenshot as an example from last year.

Let your computer work for you

If you’re a microsoft windows person check out these tips for organizing your files and folders using Windows.

I’m a mac person and I personally love the way OS X is built to organizes files and folders. If you’re new to Mac check out this post to learn some of the basics.

Filing your songs in a searchable system of your choosing will greatly serve you in the long run. You can periodically return to your ideas and pick up the refining process if you need to.

Why is this important?

You’ll discover new moments of creativity and inspiration simply from the fact that you let it steep for a while; and if you’re system is organized, you won’t have songs fall through the cracks.

How Are You Organized?

More in This Series